Pan-Indian epidemiological survey on vitiligo, focussing on multiple key parameters, associated comorbidities and psychosocial aspect of vitiligo has been completed recently. With its vast size and enormous population, number of vitiligo patients in India is among the highest in the world. Moreover, being a country of mixed religion and races, it contributes most diversified data. Once published, this will provide a highly valuable record on vitiligo and will answer various crucial aspects about the disease.

Premier institutes in India are considered comparable to the world’s best research centres and they generate path-breaking publications. The quantum of work and publications from some of these Indian centres on vitiligo will leave no scope for the level of work Indians are doing and contributing to scientific world. Enthuciasm and quality of dermatologists working in other institutes or the practicing dermatologists with limited or even no funding have done stupendous job. The number and quality of publications are enviable and documented the credibility of their work. Only few of the available works have been cited at the end of this report. (Ref 1-12)

IADVL has been persistent in its effort to support the research work on vitiligo. Special Interest Group (SIG) on pigmentary disorders has been formed to work on various pigmentary diseases and vitiligo is always the top priority.

Although, it is not possible for IADVL for fund each and every project, it has been regularly supporting research activities on vitiligo through various research grants.

World Vitiligo day has been observed on 26th June all over this vast country and most members actively participate with great enthusiasm. Each state branch of IADVL conducts CMEs, seminars, workshops, health camps on this day (Fig 1,2). 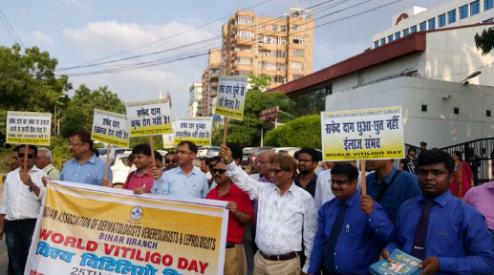 On the occasion of world vitiligo day on 26th June, 2014, along with scientific seminar, mass awareness program was initiated (Fig 3). 40 rickshaw and a motor van travelled the entire Chandigarh city with free distribution of information leaflets (Fig 4). 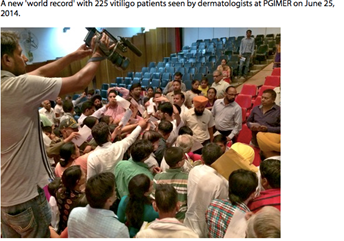 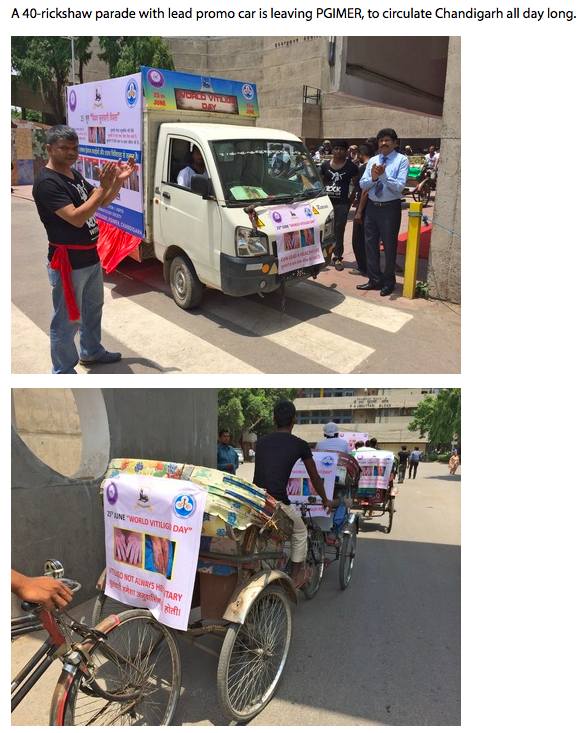 World vitiligo day was celebrated in New Delhi in 2015 and 2016. In 2016, this program was organised along with International Conference on Genomic Medicine in Skin Research at IGIB, New Delhi. International experts like Dr. Shosuke Ito, Dr. Caroline Le Poole, Dr. Mauro Picardo, Dr. Torello Lotti were invited to that program.

One of the main mottos of this observation is to reach out to the public to increase the awareness on vitiligo and to diminish the psychosocial impact of the disease. Thus, patients are involved with most of these activities. Mass media is involved, road shows are organised, lectures are given and recorded videos are played in the clinics and hospital OPDs. Patient information booklet are distributed freely. Banners and pamphlets display the basic knowhow on the disease in the prominent locations of the hospitals.

VITILIGO RATH: AN UNIQUE AWARENESS PROGRAM FOR THE FIRST TIME

Last year, IADVL Karnataka branch conceptualised a unique awareness program to reach out to the community.

A Display Van, which had banners and educative material about vitiligo called “VITILIGO RATH” travelled all over Karnataka covering 5000 km and all the districts for 29 days (Fig 5). 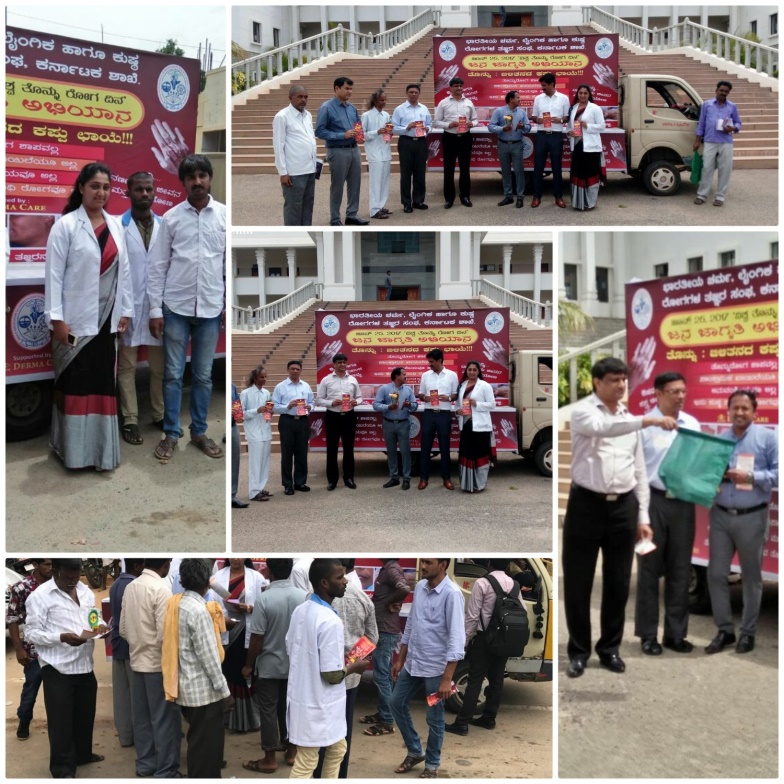 The vehicle started from the city Bengaluru and travelled many cities and districts of the state. District coordinators were identified, who gave wide publicity prior to the arrival of the vehicle and had organised various community activities. Local leaders, senior government officials like DHO and Deputy Commissioners were invited for flagging off the vehicle in the district.

In each district the vehicle stopped at prominent public places like bus stops, railway stations, markets, government hospitals and medical colleges, schools and colleges. Various activities were conducted like street Plays/ skits, sharing experience by vitiligo patients, folk songs. There were processions and human chains were formed. Educational flyers were distributed. Articles were published in newspaper and other mass media were also involved. Apart from dermatologists, medical students, teachers, general peoples, media personnel and ministers participated actively. Overall, the month-long program was high vibrant and was hugely successful in strengthening the interrelationship among dermatologists, getting the young people actively involved, and its main purpose to reach out to the most remote areas.

Validating your member no & generating OTP...

Only LM members can apply for nomination.